They’re hip. They’re hot. They’re adorable. And they’ve taken the internet by storm. If you didn’t hear about Arlo and Spot, our most beloved mismatched pair, check out these articles in Huffington Postand The Dodo.
Arlo (the husky) and Spot (the poodle) were found roaming the streets in Oakland together. The awesome folks at Oakland Animal Services took them in and cared for them. We help out our buddy shelters by taking pets from them when they get crowded or have animals that need some extra help so we took Arlo and Spot in as transfers. They were given a big double room together and we all immediately fell in love with this incredibly odd, very charming and enormously devoted couple.
Shortly after they arrived here, Arlo was diagnosed with pneumonia. The two had to be separated while we figured out if it was contagious or not. Once we determined it would be okay, they were put back together. Now that they’re back together, we’ve discovered a bit more about them and how, deep down, they’re a lot like any couple, human or dog. 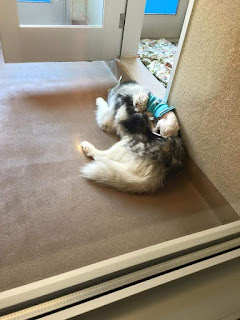 He’s my best friend AND my mattress.
1) There’s A Lot Of Chat About Who Could Have Done Better. 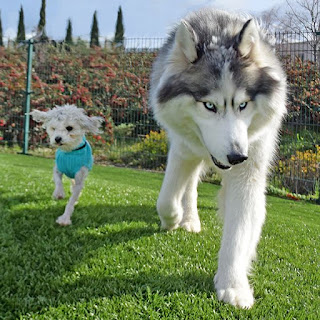 Quick – assume superhero pose.
“That husky is just gorgeous but the poodle looks like something you’d find in your lint trap”.
“Spot is just the cutest thing but Arlo looks like he wants to eat you”. *
George and Amal. Kanye and Kim. Miley and Liam. Ashton and Demi. It’s impossible to be a celebrity couple without lots of folks trying to figure out who did better. In truth, both dogs did wonderfully. Arlo is outgoing and friendly and vivacious. Spot is very devoted, loving and protective in her own tiny-poodle way.
When Arlo became ill and the two were separated they both had a hard time. Putting them back together immediately perked Arlo up and Spot…..Spot just flat out lost it she was so happy.
2) Spot Holds The Relationship Together. 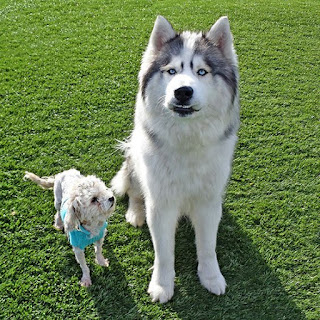 \
I could stare at you all day…..
It’s said that in every couple one person always loves more. In the case of Arlo and Spot, it’s Spot. She has great big stars in her eyes that only shine for Arlo. She can never get enough Arlo. His face must be cleaned. He must be re-fluffed. She must drape herself over him. Spot showers Arlo with attention and devotion. 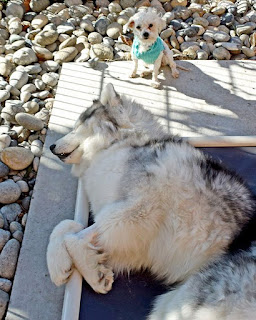 You call it being a creeper. I call it ‘adoring you’.
In fact we could do an entire photo series of nothing but Spot gazing at Arlo lovingly while Arlo eats, sleeps, plays and does just about everything except pay attention to Spot. 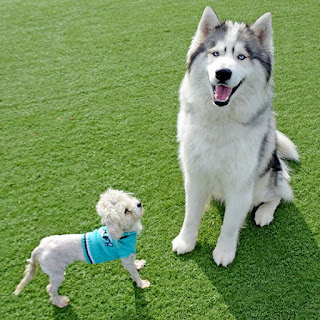 Isn’t he magnificent?
3) Like Most Married Couples, They Have Their Moments. 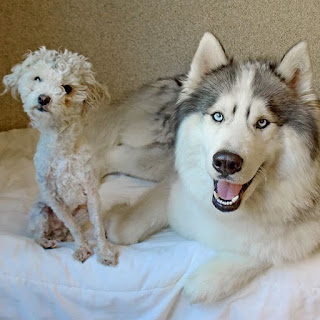 We’re not saying we’d win the big bucks on The Newlywed Game.

Yes, they sleep on top of each other. Arlo occasionally tires of being buried under kisses and cuddles. Sometimes he’ll bark at her. Spot will have moments where she hangs out on the other side of their double room by herself. Everyone needs a little time alone.
That said, what they have works. Despite finding themselves homeless, surviving the streets and dealing with Arlo’s illness, they still always look for each other in a room. They still sleep on top of each other. They still give each other super awkward kisses while Arlo is getting his tube feedings. 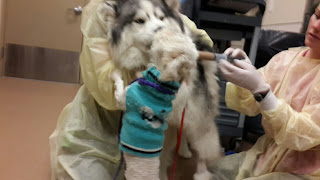 Which is basically what it’s all about. We can fight, we can drive each other nuts but when the chips are down, you stick with the one that loves you. Let that be a lesson to all of us.
To keep appraised of Arlo’s condition and when the pair will be available for adoption, follow us on Facebook.
*actual comments from social media.