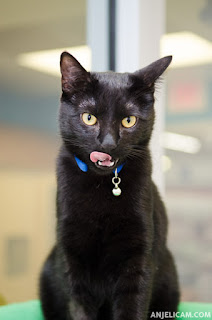 Pity the poor housepanthers. If there was ever a pet that needed better PR, it’s the black cat. For years they’ve been accused of all sorts of bad things – bad luck, black magic, tax evasion,  not liking that adorable pic of your baby smeared in applesauce you posted on Facebook – everything. Sometimes even well meaning folks wind up spreading untruths that hurt the little fuzznuggets. The common (but completely unfounded) myth that people adopt black cats at Halloween to do terrible things to them has left numerous cats sitting in shelters for an additional extra month. A month is a serious long time when you’re waiting for a forever home. Sitting around waiting for life to start isn’t good.
Because we’re super extra wicked good at PR, we decided the best way to combat the scourge of myth surrounding our coal colored feline friends is just to create new and better myths. Are any of these true? Oh, heck no. In fact we invented every single fact, statistic and quote in this blog. But since black cats seem to attract myths faster than tech start ups attract ping pong tables, we decided to swirl up some myths of our own that will help the little muffins find homes.
1) Black Cats Make You Fit. 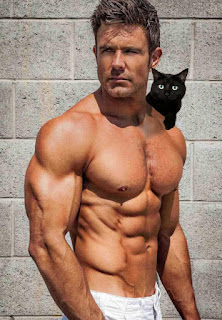 Forget GNC – it’s all about the cat hair.
Rock Hard Abs! A recent study found that people who owned black cats were 75% more likely to exercise less but get better results than non-black cat owners. “There’s something about the amount of pigment in the black cat coat that actually speeds up metabolism when humans are exposed to it.” says Dr. Mentiroso, a noted dietician and author of several fitness books. “And if you wind up with stray hairs of a black cat scattered across your work out clothing we’re getting into Incredible Hulk territory.”
2) The Adoption Of A Black Kitten Will Bring You Financial Success. 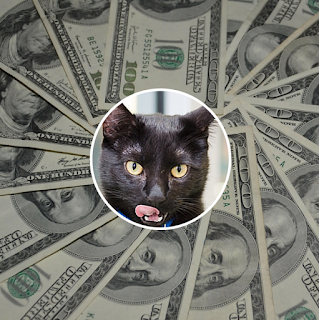 I’m all about the cheddar…

Bring the bling, baby! Of the past 400 lottery winners, 386 owned black cats or kittens. The remaining 14 winners were pretty miserable people and all the money in the world won’t help that.
Shortly after adopting her black kitten Truffatore, owner Ima Lugner of Hamburg, Germany discovered a backpack her estranged uncle had left her in his will had over 2 million Euro stuffed in a side pocket. “I never would have found it had Truffatore not been sitting on it eating a moth” Lugner said. “I was just going to dump it in the garbage!”.
3) Some Black Cats Are Actually Unicorns. 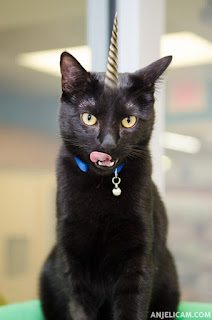 I poop gold.
They’re Magical! Extensive studies by the Equine Department of Canard University in Canular, France have definitely proven the existence of unicorns. More shocking than the presence of these formerly mythological creatures is the origin of them. “Unlike anything we previously thought, unicorns don’t come from horses” states Professeur Menteur, who headed up the study. “They actually are kittens. Black kittens, specifically. It’s very unusual to see them but some black cats will morph into unicorns at night. As their excreta is made of gold, this is incredibly fortuitous for people big hearted enough to adopt them.”
Are any of these things true?
Absolutely not but we did have a blast looking up the word ‘liar’ and ‘hoax’ in different languages to name our experts.
If you’re a stickler for the truth, here are some actual, genuine superstitions about black cats thanks to our friends at Wikipedia. 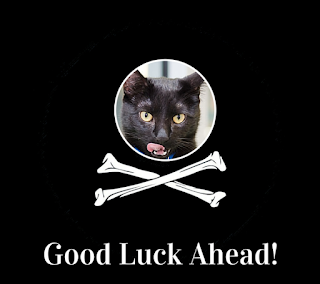 And that, my friends, is lucky for you.
*That’s actually a legit quote. A wonderful woman name Glo who had spent years working with the cats said it often.

One Comment on “Six Pack Abs, Riches Beyond Belief, A Litterbox Full Of Gold? Thank The Black Cat.”