As far as abandonment go it was an innocuous one. Instead of a pet, two forlorn sandwiches sat forgotten on the lunch table. Besides them two containers of soup were rapidly cooling.
Meanwhile, back in cat triage, this was happening: You guessed correctly – it was a kitten.
Kitten. Or to be more accurate, about 34 of them. Some strays, some surrenders, some transferred from a nearby overwhelmed shelter. So the picture should really look like this. Which means this is a whole lotta kittens.
Plus four more of them.
Each and everyone of them requiring two separate shots, a triage exam, dewormer, flea treatment and a blood draw. If you’re lucky, you get this kitten: And this is an adorable Hallmark card cuddly model kitten.
But sometimes you get this kitten: And this is a kitten that is pretty determined to skip that whole vaccine thing.
And he needs to be taken care of, too. Fingers beware.
That lunch belongs to the ladies that never sit down, the always-in-motion, the unsung heroes: the vet techs of HSSV. Only nine of them here with Cody the dog filling in for the remaining four.
And it’s probably not getting eaten any time soon.
While it’s well know we have the best vets in the universe, the thirteen women standing behind them are a huge part of what makes the magic happen and allows us to save so very many lives. In addition to assisting the docs in surgery and appointments, they also handle a lot of the medical care that our animals need.
Shooting through the building like be-scrubbed torpedos, bearing enormous carts of medications and charts, we asked the techs to make a list of what a typical day looks like for them. Are you ready?
First, there’s just the regular meds: around 100 medications given out every day to different animals in the shelter. Anyone want to try and pill ten cats, let alone fifty a day? You think I’m taking that pill? Bring it, sister. Bring it.
Plus the triages. Every animal that comes in gets what those kittens up there are getting – exams, shots, bloodwork. The day they logged? Thirty four triages. THIRTY FOUR. A transfer had come in, which is not unusual. So after you finish all those pills, get the needles ready. Being the amazing caring rock stars that our techs are, they manage to do each one as quickly and gently as possible. Case in point: This is a stunt dog – not an actual photo of THE angry dog. Though this dog is angry.
While no one was injured, it took them thirty minutes to get the little muffin calmed down enough to get through it. After we’re done with this little ball of fury, there’s up to seven more foster appointments to get through. Some are health checks, some are vaccines and if they’re routine, the Unstoppable Tech Army does them.
Are we ready to assist in surgery now? Wait for it… there’s an emergency. A nearly dead kitten brought in a box. Not nearly dead now. Very happy. Thanks guys.
Yup, Britney the kitten. She’s all better now. If you don’t know her story, check her out. But emergencies aren’t uncommon. First thing in the morning was an emergency appointment of sick kittens. And after Britney is saved, another kitten comes in, anemic with fleas. A blood transfusion is hooked up for that kitty.
A little reminder we’re still on one day here. And while we have thirteen rock star techs, not all of them are every day.
But yes, back to the surgery assisting bit. 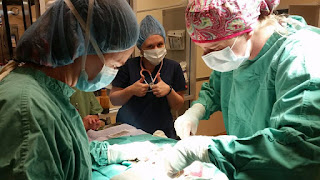 Thumbs up for surgery!
There are thirty to forty surgeries done here pretty much daily. While most of them are spays and neuters… 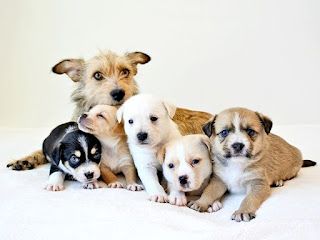 Thank you for making this a one time gig, spay/neuter folks. I need sleep.
Some of them are a good bit more complicated. 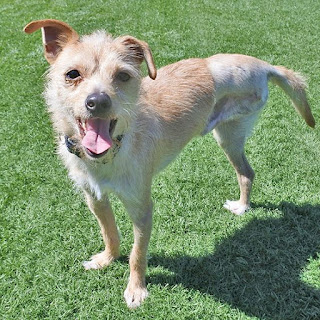 Like those new tripod motorcycles, I’m built for speed.
Today there’s a kitten with a crushed tail that needs to be spayed and have the tail amputated. Our medical department did such an awesome job that she not only recovered, she got adopted a few days later. 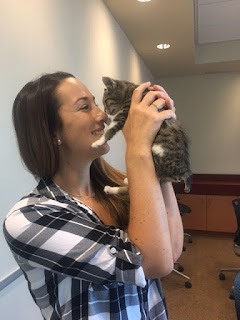 That’s Amber, the tail-less kitten but not her adopter.
They also do the dental cleanings and get the xrays done. On this day there were five of them. If they need extractions or extra work, the vets do it but the techs make a lot of stinky mouths clean and pain free again. 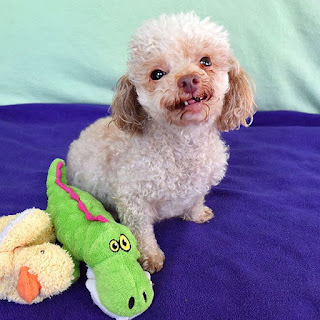 Check out  my killer new smile!
So while our vet techs are pinging all over the building, forgetting their lunches, checking in the new kids, assisting in surgeries, re-assuring foster pets and dealing with emergencies and the occasional demon kitten, we need to take a moment to offer a huge round of applause to each and everyone of them.
We are enormously grateful to have the fantastic medical resources and facilities we have that allow us to save so many. We’re super grateful for the support that makes all of that possible. But we’re also grateful for the best, busiest, vet techs in the universe.
Naadia, Cindy, Megan, Cathy, Lauren, Michelle, Fumiyo, Candice, Katrina, Jen, Misha, Jo, Karen, Karla – we love you all. 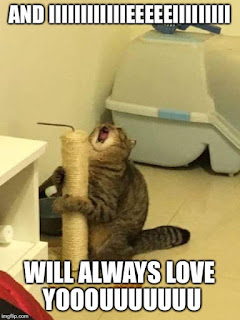 And so do the animals you save 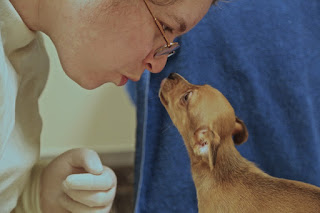 .
Actual vet tech Megan with real puppy.
We don’t know about the rest of you, but we’re exhausted after just reading this. *
* It should probably be mentioned that a lot of our techs are also foster parents, too. Talk about taking your work home with you.
** We do actually let our vet techs eat. On the day this tracked, though, several of them left sandwiches on the table to deal with an emergency giving a provocative opening.