So this is absurd.
We get a lot of hamsters. They’re cute. As shelter workers, we see a lot of cute. It’s not that we get immune to it, it’s just that we’re connoisseurs of cute. Particularly with pocket pets, most of which are pretty stinkin’ adorbs. So when we got a bunch of hammies in from a fellow shelter no one was too excited. Everyone was happy they were safe and on their way to a great life but no one outside of the relevant departments was running over to meet them.
But then, then there was Topper. 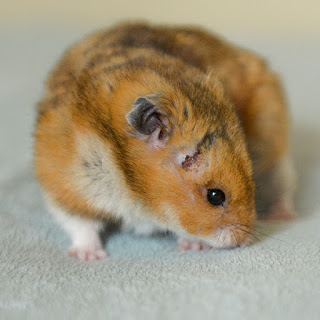 Don’t underestimate. He. Is. CAPTIVATING.
As far as hamsters go, Topper wasn’t winning America’s Next Top Hamster modelling contests. His fur was a bit patchy. He had been housed with his siblings for a while (Big. Mistake.) and they had attacked him, leaving a lot of little scabs on him. Part of his ear was missing. Compared to his picture perfect siblings… 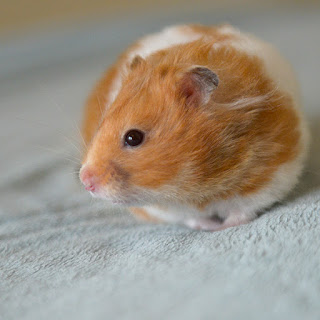 Ear-eating sibling.
Little Topper was lagging pretty far behind on the cute-o-meter.
While he went through medical treatment, his cage was set up on Transfer Coordinator Candy’s desk, on a high traffic inter-office corridor. This isn’t unusual – our staff areas tend to have a lot of office foster critters hanging about. What was unusual, though, was that Topper was the first hamster in the history of HSSV to know how to work it.
For a wee little threadbare creature, he knew how to put on a show. Instead of hiding in his little hut, he was always out at the front of the bars, soliciting attention and dangling from the top of his cage. He’d hop into any hand offered to him and didn’t fear passing dogs at all. A fastidious housekeeper, he’d take offered treats and deposit them politely into his food bowl for later. It got to the point where any time you walked down the corridor you’d see a crowd gathered around his cage. 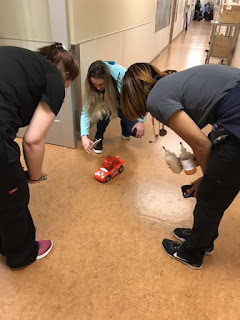 Vet staff and intake crew take a break to oooh over Topper.
The most popular phrase in the shelter became “I’m not really a hamster person but…” and would be finished with a description of some adorable thing Topper had done. He had gotten his butt stuck halfway out of his (now upgraded) little wicker hamster hut. He had shoved 16 little barley snacks in his mouth. He met staff member Laura’s dog and did this… 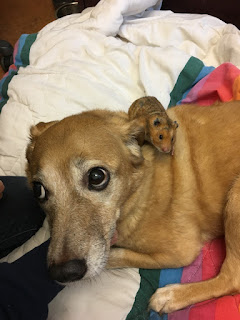 I’m not a hamster dog but Topper…
And while out driving his little car around (because yes, he has a little car) he met Patty’s dog, Little. 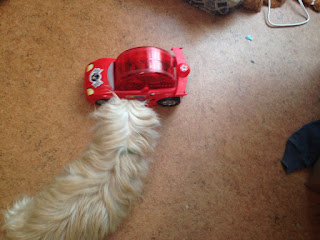 Good God, hooman – he IS captivating.
And was totally fearless.
As his sibs got adopted, little Topper stayed on Candy’s desk getting treated for his wounds and winning the hearts of even our amazing facilities guys who were busted spending some time watching ‘Topper TV’. No one was immune to Topper’s charms. He was the Dwayne ‘The Rock” Johnson of HSSV.
Which left Laura, Foster and Animal Care Manager, only option.
We had to hire him.
So here’s the bad news: You cannot adopt Topper.
The good news? He will be taking a new position as Official Hamster and Education Assistant (he’ll make occasional visits to our summer camp and education programs to teach kids about pocket pets). He’ll be working from home (as his new home is in Laura and Patty’s office) and continue to commute around the office in his little red car with the paparazzi following him.

More good news? BOTH of our Petco Neighborhood Adoption Centersare open again and have hammies. While we can’t guarantee all hammies are as amazing as Topper, The Most Charismatic Hamster In The Universe, they are pretty adorable. And if you’re not a hammie person, the NAC’s also have cats, buns and other pocket pets. So stop by. Or check out our adoptables here.

In the meantime you should probably just watch him drive his little car around some more.