You wouldn’t think it would be possible to say that the passing of a 13 year old dog was sudden but it was. Gizmo had some issues but none of them were life threatening and all of them were under control. Which is why it was a shock when, after seven months in our care, the elderly terrier went into renal failure. 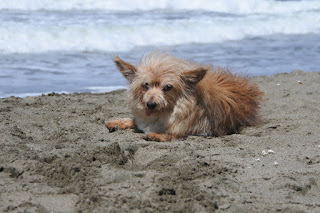 Gizmo didn’t have a home but did have a family of sorts, some houses he loved to visit and a good life. When he passed he was attended by one of his best friends; a staff member that brought him home for sleepovers and had him in her office a lot. The vet that had steadfastly monitored his care was there. He didn’t go with strangers and he didn’t go because he didn’t have a home. He went because he was old and his body couldn’t go on anymore.
From the moment we met Gizmo, he was a mess. With only three teeth left in his head, his tongue protruded to one size. His coat was so thick and tangled he looked more like a bathmat then a dog. He wheezed and sneezed. And with his little brown button eyes and low wagging tail, he was irresistible. Found on the streets, his time was running out at a crowded city shelter. When the other shelter let us know he needed help, Transport Coordinator Candy  swooped him up and brought him back to us. 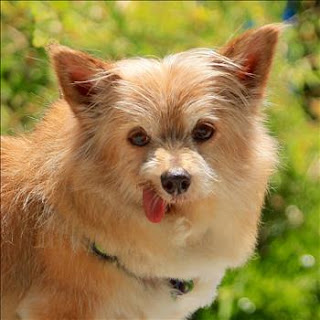 Gizmo spent the majority of the seven months he was with us in foster care. While he came in for doctor visits and adoption fairs, he lived the life of a normal dog. He went for walks. He rode in the car. He slept in a home. Due to his lack of teeth, he had his meals specially prepared. He left a debris field when he ate which no one thought was a big deal. When his wheezing and sneezing proved to be asthma, we got him an inhaler. Meanwhile we looked – and believed in our heart of hearts – that there was a forever home out there for him. We took him to NBC where he did a Perfect Pet segment and stole the hearts of everyone on set. 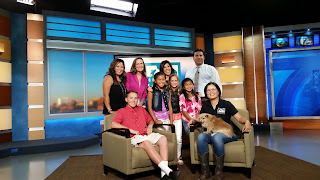 When his foster parent wasn’t able to care for him any more, he spent most of the time in Behavior Programs Manager Michelle Suarez’s office, waddling after her with gusto as she worked. Due to his mellow nature he was given the run of the joint so he could follow her wherever. Some nights he went home with her, some he went home with volunteer Kelly, who took him on beach outings….. 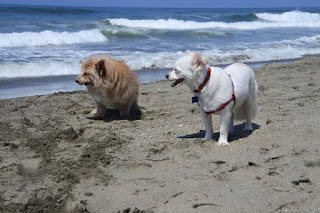 and made sure he didn’t miss longer walks by finding him a cool ride. Because Gizmo loved walks, even if he couldn’t keep up. 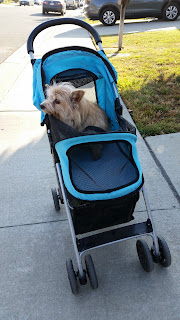 Sure enough he DID steal someone’s heart. The potential adopter had to go out of town for a few days so Gizmo hung with Kelly while he waited. During that last weekend, he stopped eating and became lethargic. A blood test confirmed that his kidneys had begun to fail. There was no cure and there was no comfort. Amid tears, the decision was made to put him to sleep.
While this wasn’t a happy ending, the story of the last seven months of Gizmo’s life IS a triumph for many reasons. 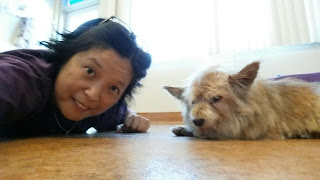 Gizmo had a big life. He went on TV. He went to the ocean. He went just about everywhere and hung out with his buddies all the time. Gizmo didn’t have a big life because he had a bucket list or because anyone felt sorry for him. He just had a big life because (with the aid of awesome foster parents) that’s what we could offer him. Foster parents like Kelly have taken many dogs to the beach and given them islands of normalcy during a transitional point in their lives. He went on TV because our local media supports animals and wants to help them find homes. He had a great life because people cared.
Almost more amazing than the fact he had a normal life was the fact he had a life at all: ten or twenty years ago, the script for an elderly, special needs dog found as a stray would have been very different.  He would have been written off as a hopeless case. Instead, staff at the busy city shelter went out of their way to find a second chance for Gizmo. When their resources were taxed, the city shelter spent time finding a way to get the animals in their care to safety. The staff there were certain that with a more time and more care, a dog like Gizmo would find a home.
That certainty speaks volumes to where we are as a society.
Another reason Gizmo’s life was a triumph? There were options like us available for him. There were arms willing to welcome him. Candy, our medical staff, our receiving staff, our managers – nobody balked at taking on Gizzy and his medical issues. That’s what we’re here for.
Us being here – and being so embraced by our community – is a triumph in and of itself.
No, Gizmo’s story doesn’t have a textbook happy ending. There’s no unicorns, no sunset, nothing to wrap it up in a happy bow.  What it does have, though, is proof that we have come so very far.
RIP Gizzy. Thanks for everything you taught us. 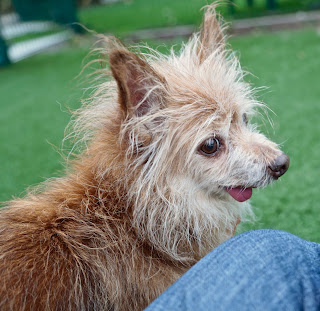