We have a story to tell. It’s about mama dogs, puppies, and some amazing humans.
A few months ago, something started happening. We started getting lots of calls asking if we could take in pregnant mama dogs. But mamas and pups need to go into foster and stay there until their pups are about 8 weeks old. So we reached out to our foster families and asked for their help. And lucky for us, they stepped up.
This is Brandy. Hi, I’m Brandy.
Brandy kicked off the recent wave of mamas. She was pretty pregnant when she came to us, and we weren’t sure how many pups she was going to have. One of our awesome foster parents took her in, and we waited for pups to arrive.
Brandy wasn’t the only one. She came in with a sister named Butters. Butters was also pregnant. Hi, I’m Butters.
Butters was placed with another foster, and the waiting game became more intense. The foster parents started sharing photos of the pregnant sisters, and our staff and other volunteers weighed in on a guessing game to see how many puppies each girl would have.
Brandy came first. Three pups! I can handle this.

“There are three!” Brandy’s foster mom said. “That’s great,” we said, “but are you sure she’s done?” Oh no. What do I do with four of these?
“You’re right,” foster mama said. “I was premature. She ended up with four!” “I don’t know,” we said. “Maybe you should wait a little longer.” I am suddenly so much less excited than I was before.
Brandy concluded the evening with seven puppies in total. And we’re pretty sure her foster mom lost a bet.
Butters, not to be outdone, came next.

I deserve a rest.

Butters was slightly less ambitious, and only ended up with six puppies. Thank you for not being #7.

And clearly, she was happy about those results.

But the puppy train wasn’t over yet. Nani’s foster mom got Nani her very own pregnancy shoots. Yes, you read that right. She had a photoshoot. She settled right in as a new mama. All the adorableness was throwing our staff in a frenzy. We waited with bated breath for the next batch of puppy photos to come through. Puppies, or guinea pigs? You decide.

We noticed some of the mamas had a few quirks…. Week by week, the puppies continued to grow….

…until they started to look like actual puppies. (These are Butters’ nuggets). At about 8 weeks old, the pups came to our Milpitas Animal Community Center for another round of vaccines, their spay/neuter surgeries, and of course, a photoshoot! They were put into adoption suites, and no surprise, were adopted almost immediately.

And so were their mamas! 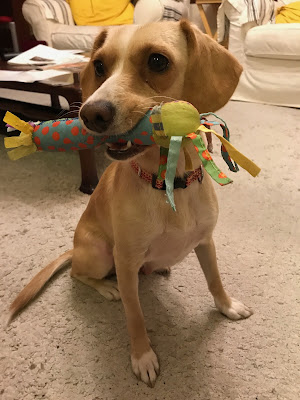 After a long two months, these hardworking mamas all found forever homes. Now Brandy, Butters and Nani will get to be the babies – and spoiled endlessly.

You may be saying to yourself: this is a great story, and I love the puppy pics, but what’s the point? Yes, what is the point?

(These are two of Nani’s babies).

The point is the common thread among all of them: Brandy, Butters and Nani were rescued and able to raise their puppies to be happy, healthy pups because of fosters. They each had dedicated foster families who stepped up when they needed them, and cared for them for weeks.

And we have good news! You, too, can help us save more moms and pups. Foster a mom (she does so much of the work!! Just look at those tired faces) and you’ll be up to your ears in puppies. Dream. Come. True.

4 Comments on “A Puppy Palooza Story”